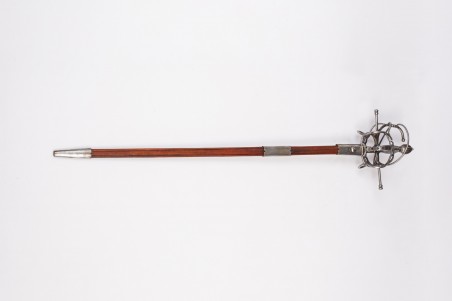 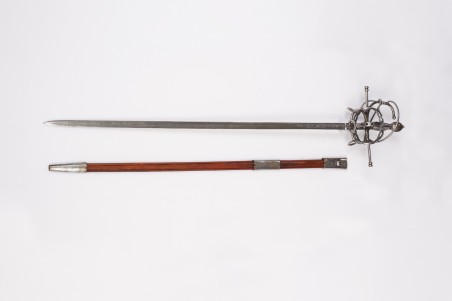 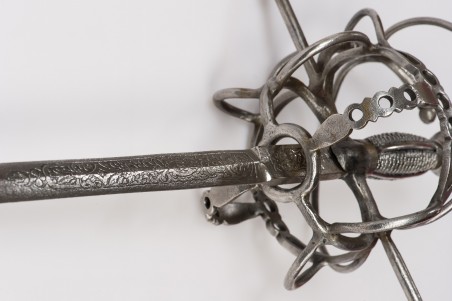 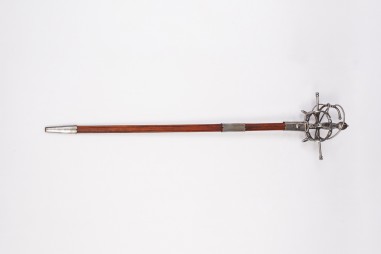 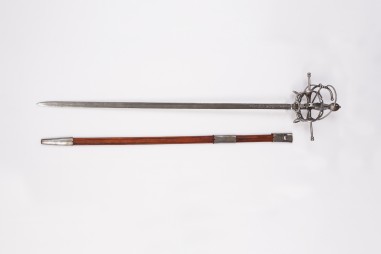 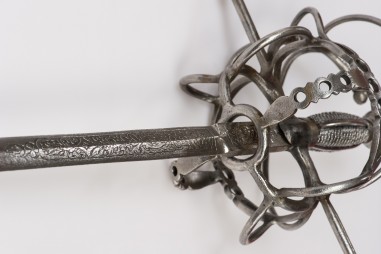 SWEPT HILT SWORD WITH FRETTED GUARDS. 16th Century. Handcrafted in carbon steel with an antiqued finish, made by master swordsmith of Toledo, .

Despite its double edge, this sword was designed especially for thrusting, so it can be assumed that it would be used by knights as an auxiliary weapon in the 15th century. These swords were used in training at the most famous fencing schools in Spain, where pupils were taught to wield one or two rapiers at a time: a rapier and a dagger, or a rapier and a shield. Each school had its own personal style and its secret thrusts.

The swordsmiths of Toledo garnered fame worldwide because they used a special technique for tempering the steel blades, and it was said that the waters of the Tagus River had special properties that facilitated this tempering.

BLADE. 94 cm long blade, 2 cm at the ricasso and 1 cm at the point. It was forged and tempered by hand in carbon steel by the master . Very strong, easy to use blade.

The ricasso is engraved on both sides: on the front it is inscribed with the words “En Toledo”, to indicate that it was made in this city, and bears the master’s touchmark, “AA”, and the back side features a very delicate engraving. The blade is engraved on both sides from the ricasso to the forte, and it is divided into four bevels, two on each side, down to the point.

GRIP. The round wood grip is threaded onto the blade tang and wrapped in double wire wrapping: first with twisted iron wire and second with double iron wire. Four ribs have been embedded into the grip and are held by two smooth iron ferrules at either end of the grip.

POMMEL. The oval-shaped pommel has 16 grooves. It is topped with a ball and threaded onto the blade tang, then riveted to make the sword stronger and sturdier.

SCABBARD. Brown leather scabbard made by hand especially for this sword. It contains three iron pieces: at the top is a smooth “brocal”, or locket, with an oval button to attach the scabbard to a belt. There is one smooth “cantonera” fitting in the upper third of the scabbard, and it is finished with an iron “batiente”, or chape, to cover the point.


Notify me when available
Tap to zoom