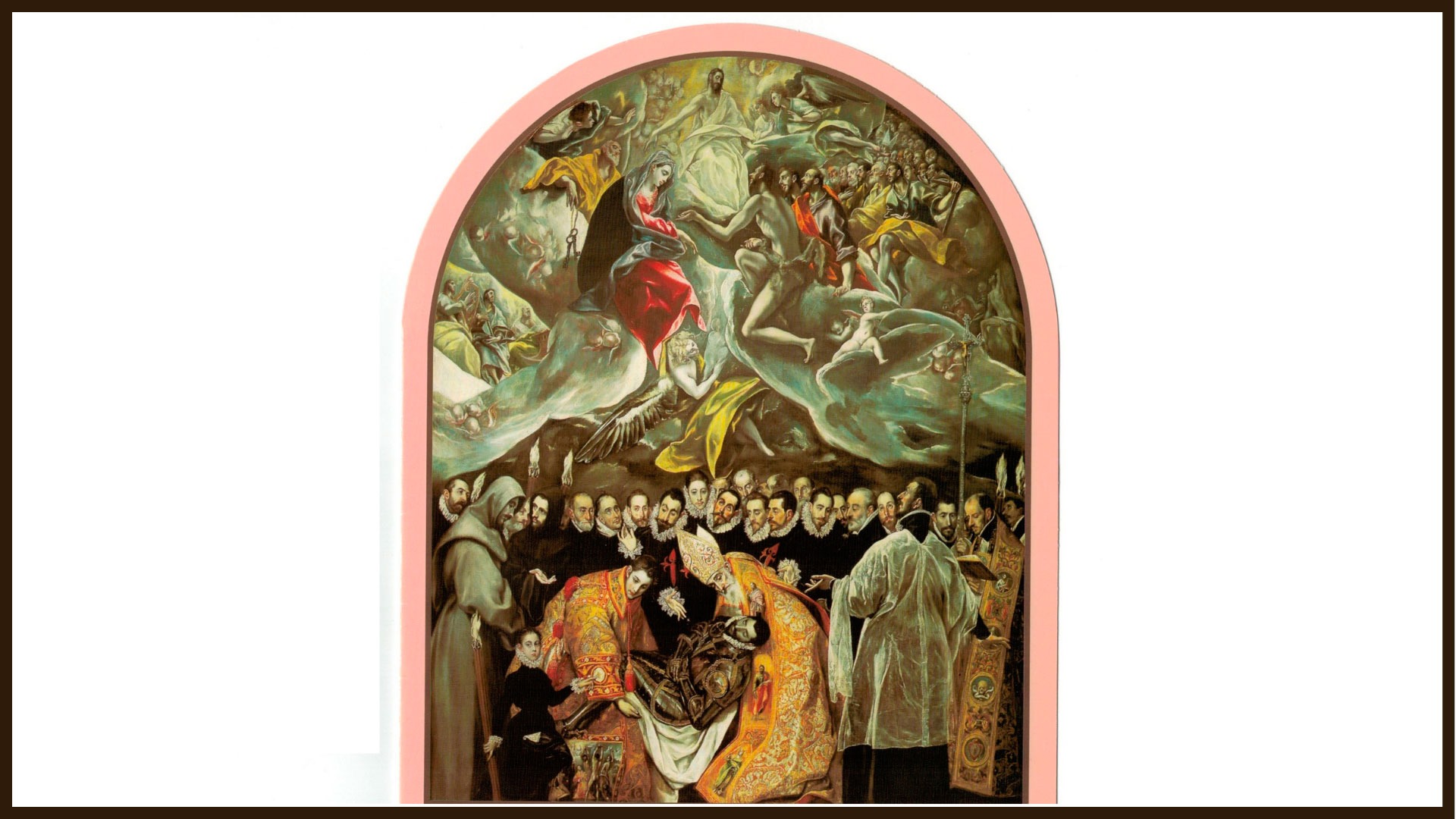 El Greco's name is linked to the city of Toledo, and in a very special way to the Parish of Santo Tomé through his masterpiece "The Burial of the Lord of Orgaz".

The "Burial of the Lord of Orgaz" is a historical work of universal painting. Incorrectly it is very often called "The Burial of the Count of Orgaz". When Gonzalo Ruiz de Toledo died in 1323, he was not a Count, but a Lord, and it was not until 1522 that Orgaz passed from a lordship to a county.

Don Gonzalo Ruiz de Toledo was a 14th century nobleman, much loved by many Toledo people, who wanted to leave a testimony of his faith in different ways.

He chose the Parish of Santo Tomás Apóstol for his eternal rest. His death was received with great sadness by many Toledan families.

The orders that the residents of the Villa de Orgaz had to carry out consisted of the donation of 2 rams, 16 chickens, 2 skins of wine, 2 loads of wood and 800 maravedis to the administrators of the temple.

In 1564, the parish priest Andrés Núñez Madrid initiated a lawsuit before the Chancery of Valladolid for refusing to continue to hand over the goods demanded, in the last will and testament of his former master.

The courts agreed with the priest in 1569 and he decided to commission a commemorative epitaph in Latin by Alvar Gómez de Castro. This inscription also included the account of the prodigious event that took place at Don Gonzalo's burial.

There was an old tradition in Toledo that pointed out how in 1327, when his remains had been moved from the convent of the Augustinian friars to the Parish of Santo Tomé, they had participated in the deposition of his body in the tomb of Saint Augustine and Saint Stephen, while the admired assistants heard a voice that said: "Such an award is received by those who serve God and his saints".

The miracle was officially recognised in 1583, and the parish priest D. Andrés wanted to leave an imperishable testimony by commissioning a canvas to preside over the recently remodelled Chapel of the Lord of Orgaz. To do this he used the best painter in the city at that time: Domenico Teotopopuli, better known to his fellow citizens as El Greco.

At that time the artist lived in the houses of the Marquis of Villena, and was therefore a parishioner of this same temple.

On 15 March 1586 the agreement between the patron and the artist was signed, in which the iconography of the lower part of the canvas was fixed very precisely. The payment would be made after an appraisal, and the painting had to be finished by Christmas of that same year.

The work was extended for a longer period of time, being delivered in the spring of 1588. It was appraised by Luis de Velasco and Hernando de Nunciva at 1,200 ducats, an amount that seemed excessive to the parish priest, compared to the 318 of the "Expolio" of the Cathedral or the 800 of the "San Mauricio" of El Escorial.

As no agreement was reached, the Archbishop's Council had to intervene, and after several appraisals, it was determined that the value of the first appraisal should be paid.

The extraordinary artistic work reflects the highest level of Cretan artist's production, being a paradigmatic work within the evolution of Spanish art both in terms of its artistic matter and its spiritual content. It is one of the peaks of Renaissance painting, overcoming some of the spatial limitations to which he had been subjected in his previous production.

In 1975, the painting was restored by the I.C.R.O.A. taking advantage of this moment to place the painting in the place where we can now contemplate it.

The painting represents the two dimensions of human existence: below death, above heaven, eternal life.

El Greco, captured on this canvas what constitutes the catholic horizon before life and before death, illuminated by Jesus Christ.