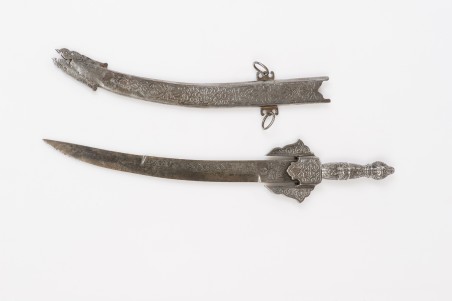 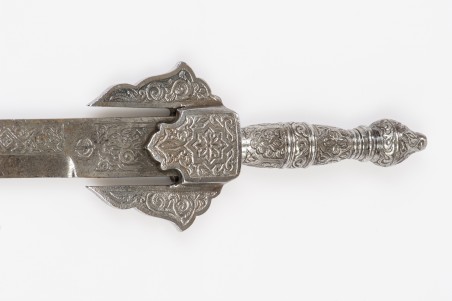 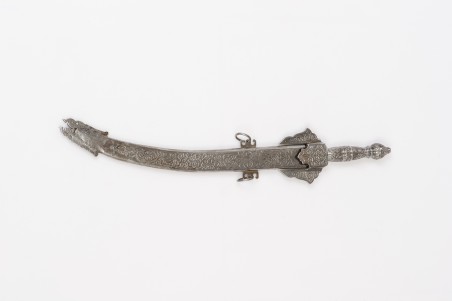 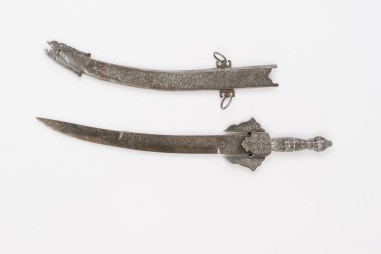 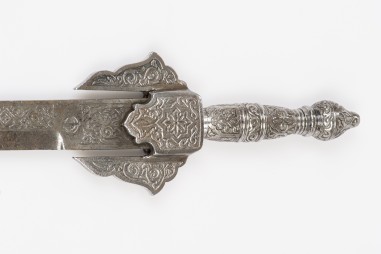 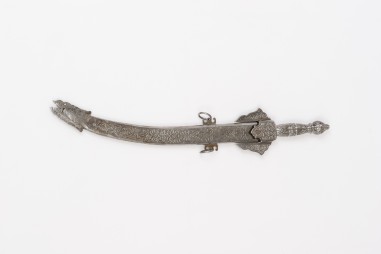 ENGRAVED AND CHISELLED ARAB KOUMMYA. 14th Century. Handcrafted in carbon steel with an antiqued finish, made by master swordsmith of Toledo, .

The koummya is a curved dagger with two edges, the inner of which is shorter. The origins of this weapon date back to some time in the 14th century, and it derives from other small weapons of Asian and Berber origin. The Spanish term “gumía” apparently derives from the Arabic word “koummya”, which originally meant “under the sleeve” or “up the sleeve”. Despite the fact that it is a very ancient weapon, it is still produced and used today, with slight modifications. It was used by the Moroccan troops in the war between Spain and Morocco, and in the Spanish Civil War.

The general features shared by all koummya include a sumptuous sheath generally made of silver-plated iron or copper and brass, a narrow hilt that could be made of iron, wood, metal or bone, and a blade that is quite often rather plain, simply made of well-sharpened steel.

The Arabic horoscope was designed so that each sign of the zodiac was portrayed by a weapon, and it was divided into three different groups, with the koummya being classified among the small weapons. This category of weapons includes the machete, the stiletto, the knife, and the koummya, or Arab dagger. According to this thousand-year-old horoscope, people falling under these four signs usually seek permanent, serious sentimental relationships, which can lead them to become somewhat possessive over their partners. They are true to their principles, and one of their goals is to protect their loved ones. They have no tolerance for betrayal, and, through their persistence, they succeed in achieving their goals.

BLADE. 34 cm long blade, 2.7 cm wide at the ricasso and 1 cm at the point. Completely forged and tempered by hand in carbon steel by the master . Antiqued finish.

Curved blade with engraving on the ricasso and the master’s touchmark, “AA”, on the back. Below the ricasso, geometric designs are engraved on the forte near the blade spine.

GRIP. The grip is a piece of solid iron, engraved and chiselled on the entire surface. It is threaded on the blade tang.

POMMEL. The pommel consists of engraved and chiselled solid iron. It is riveted to the blade tang to enhance the koummya’s strength and solidity.

SCABBARD. Made entirely of iron with engraving and chasing along the length of the sheath, with two rings in the upper quarter of the sheath so it can be attached to a belt.