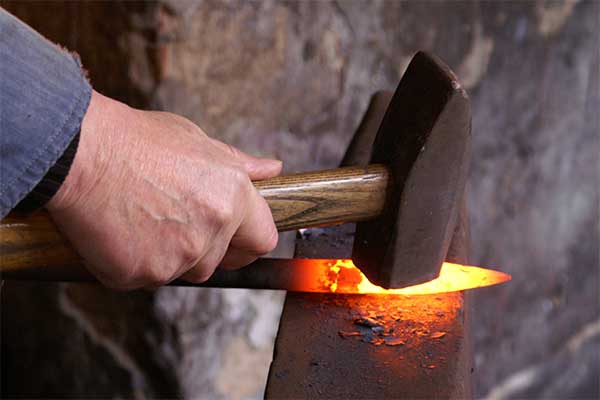 The quality of Toledo steel resides in the skill of the artisans and the secret way it is tempered, ascribed to the waters of the Tagus River, where this process took place. The high temperature of the tempering process and the quality of the steel make the swords of Toledo unique the world over.

The extraordinary strength of these pieces and their exquisite hilts won over some of the most important figures in history, placing these beautiful weapons among their most prized possessions.

According to history, more than two thousand years ago, the blacksmiths of Toledo began forging falcatas, a deadly weapon in the hands of the soldiers of Hispania, specially designed to make the wounds inflicted more fatal. Hannibal chose this type of weapon for his army.

Tizona and Colada, two swords owned by El Cid, were Toledo swords, and the Muslims, who were familiar with the quality of the Toledo sword, adapted this advanced technique to create their scimitars.

After the Reconquista, Toledo emerged as the greatest sword-making centre in the world. The technique used for the Toledo sword had a “soul of iron”, consisting of a steel blade that concealed a wrought iron strip inside it, thus preventing the steel from bending or cracking.

When swords began to be replaced with firearms, Charles III created the Royal National Factory of Weapons in 1761 to protect this art form by bringing together all the master artisans and safeguarding this industry.

The composition, tempering and design of these swords was always shrouded in secrecy, passed on from sword-making artisans to their sons, which led kings and heads of state from around the world, and even a Japanese samurai seeking the best quality weapons, to have their weapons manufactured in the city of Toledo.

Some of the most famous Toledo swords in history include: 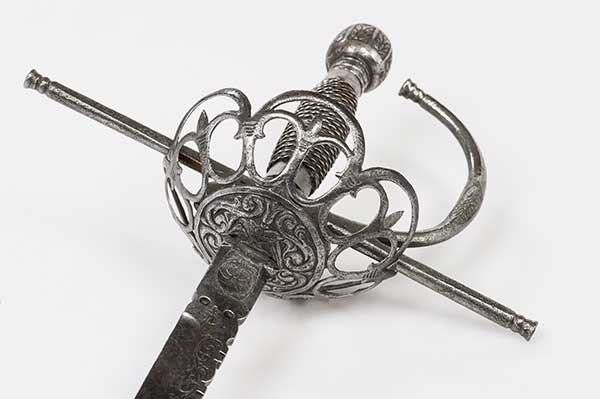 The rapier, or “espada ropera o de cazoleta”, also known as the “striscia”, depending on the country, was a weapon that defined an era. It began to evolve in the early 16th century, continuing up to the end of the 17th century. In Spain, where its use was particularly widespread, it became extraordinarily successful.

Although the rapier originally featured a long wide blade, it evolved over time into a long, straight, narrow, light-weight blade that could reach over one metre long and weight up to one kilogram. The rapier was used for personal defence and for duelling.

Rapiers were held in one hand and had richly decorated guards (to protect the sword grip), classified into three types: swept hilt, shell hilt and cup hilt.

The swept hilt guard is the oldest type. It arose in the late 15th century and consists of long, narrow, intertwining quillons (to form the sword’s cross guard) that create a series of several loops, thus forming the knuckle guard intended to protect the extremity of the wielder of the rapier. However, this guard was not entirely effective, because the point of the adversary’s sword could pierce the hilt and injure the swordsman’s hand, even though gloves were worn by those who carried these swords. Therefore, further elements were needed to reduce the risk of injury.

As fencing evolved, the point of the sword began to be used more heavily, making it necessary to provide greater protection for the hand, so metal plates (shells) were often placed between the rings of swept hilt rapiers.

With time, these shells came to be made of a single piece of iron, attached to the cross guard with a couple arms. Thus, the typically Spanish shell hilt arose. It was widely used by military orders.

To further enhance the hand protection, a cup-shaped, half-round bowl attached to the guard with two arms was designed. This cup, along with the quillons and the knuckle guard, afforded excellent protection for the hand, and was also very light weight. The hand was protected by an arch running from the quillon to the pommel and by the so-called “cazoleta”, or bowl. The cup hilt rapier was in use until the late 18th century. The cup could have a variety of finishes (fretting, engraving, chiselling, damascening, etc.) and was attached to a slender, light-weight, very well tempered blade that usually had four bevels, two on either side of the blade.

This weapon was designed especially for thrusting, even though it had a double edge. The most important part of the sword was the blade, and proper tempering was what gave a sword its durability and flexibility. The swordsmiths of Toledo garnered fame worldwide because they used a special technique for tempering the steel blades, and it was said that the waters of the Tagus River had special properties that facilitated the perfect tempering of the steel of Toledo.

Initially, only the upper echelons of society, such as the members of the royal family, monarchs and knights of military orders like the Order of Alcantara, were allowed to use rapiers. Thus, to wield this type of sword was a symbol of prestige and power. However, as time went on, other people also began to use rapiers, such as scholars, the bourgeois and soldiers, usually in combination with a dagger, always designed to match the sword.

Rapiers were usually used in combination with a dagger, which was always designed to match the sword.

Don Quixote himself used this type of sword to battle the windmills, believing they were giants, to attack a herd of sheep, which he mistook for the enemy’s army, and to fight against the wineskins he thought were ghosts.

Rapiers were also used by the brave captains of the Tercios of Flanders and by the courageous conquistadors of America. 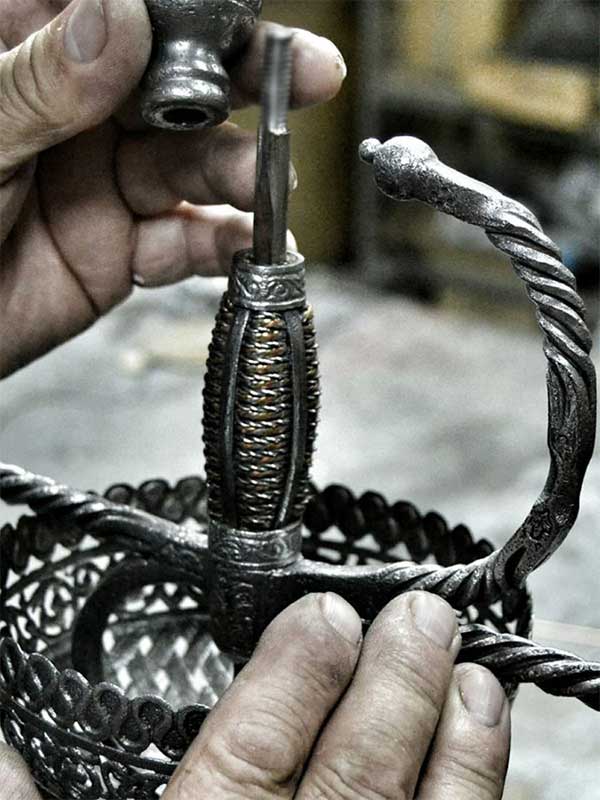