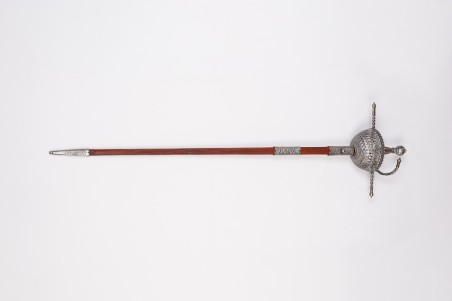 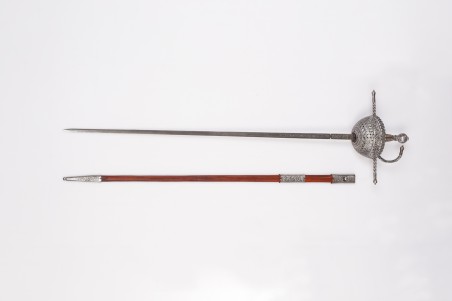 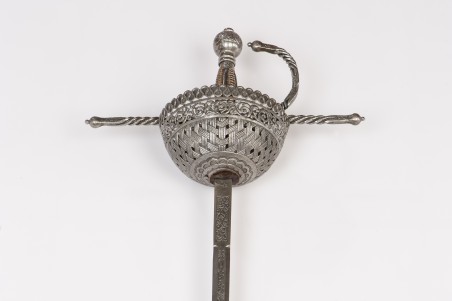 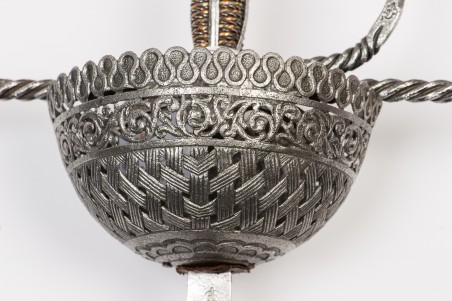 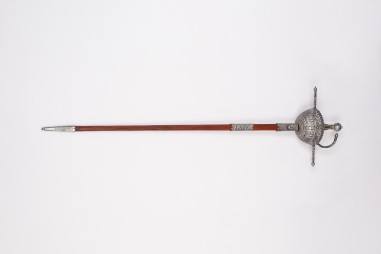 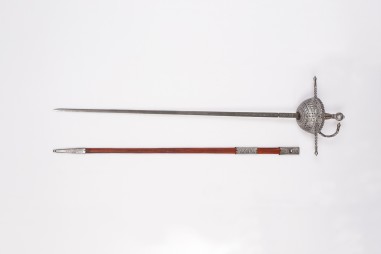 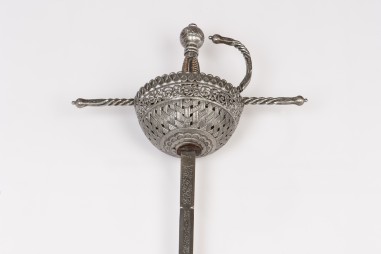 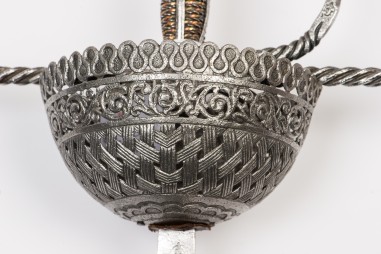 KNOTTED SPANISH DEEP-CUP TIZONA. 16th Century. Handcrafted in carbon steel with an antiqued finish, made by master swordsmith of Toledo, .

The Spanish Tizona, popularly referred to as the cup hilt sword because of the shape of its grip, was in use throughout the 16th and 17th centuries. This is a Spanish-style sword with a distinctive hilt shaped like a half cup that could have a range of finishes: fretwork and/or chiselling, etc. Its blade is slender, light-weight, and very well forged and tempered.

It was used extensively in Spain and Italy until well into the 18th century. This is the classic hilt style we all conjure up in our minds when the rapier is mentioned.

Don Quixote himself used this type of sword to battle the windmills, believing they were giants, to attack a herd of sheep, which he mistook for the enemy's army, and to fight against the wineskins he thought were ghosts.

BLADE. 90 cm long blade, 2 cm wide at the ricasso and 0.5 cm at the point. It was forged and tempered by hand in carbon steel by the master . Very light-weight, thin, easy to use blade.

The ricasso is engraved on both sides: on the front it is inscribed with the words “En Toledo”, to indicate that it was made in this city, and bears the master’s touchmark, “AA”. The back side features a very delicate engraving. A fuller runs down the blade from the ricasso to the forte, featuring engraving on both sides. Below the fuller, the blade is divided into four bevels, two on each side, down to the point.

CUP. The cup is extremely elegant, comparable only to the most highly prized swords of that period. It is elaborately decorated with numerous designs, featuring an interlaced pattern at the bottom, Renaissance-style fretwork in the middle and chiselled fluting along the upper edge.

CROSS GUARD. The cross is delicately decorated to match the cup. The main quillon measures 31 cm long, and is made of twisted iron on both sides with a chiselled central block. The knuckle guard bears the same pattern as the cross. Two semi-circular side arms reach out from the cross to the cup, and are attached to form a single piece.