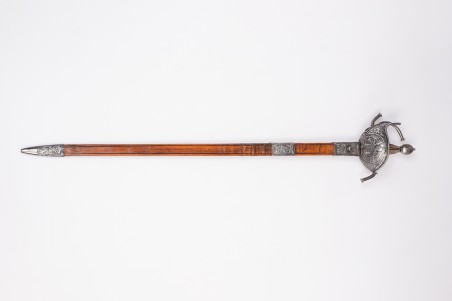 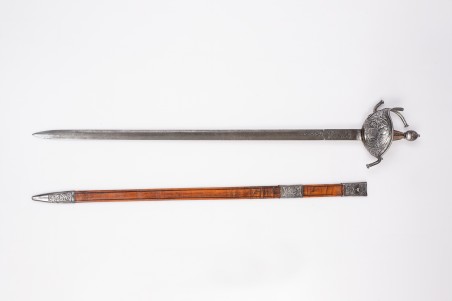 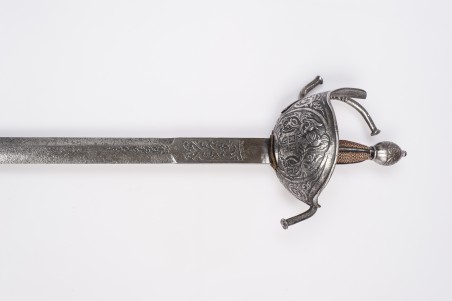 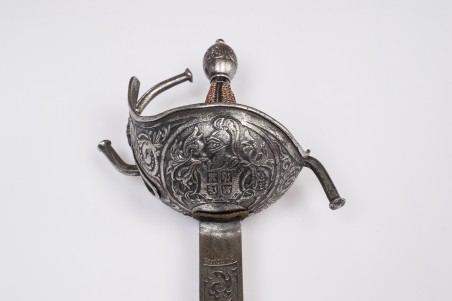 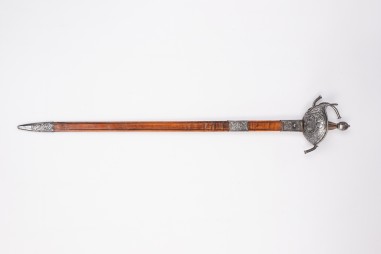 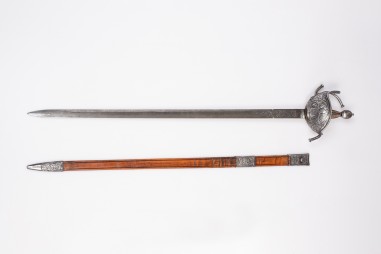 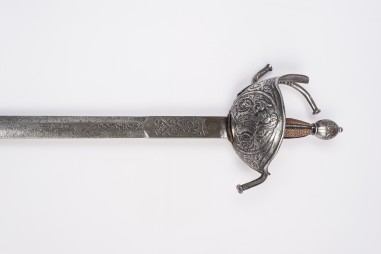 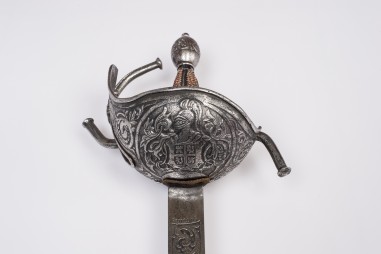 ENGRAVED AND CHISELLED CHARLES III SWORD. 18th Century. Handcrafted in carbon steel with an antiqued finish, made by master swordsmith of Toledo, .

In the 18th century, Charles III, a member of the House of Bourbon and an extraordinarily dynamic leader with an enterprising spirit, fostered economic and cultural growth in Spain. He founded the Royal Factory of Weapons in Toledo and commissioned several important architectural works, along with the modernisation of the country’s capital, thus leading him to be known as “Madrid’s best mayor”.

Charles III of Spain was the third male son of Philip V, his oldest son by his second wife, Isabelle Farnese, meaning that his half-brothers, Louis I and Ferdinand VI, were to follow their father in the Spanish throne. When they died without heirs, Charles took the throne. Charles served the royal family by playing a key role in the struggle to recover Spanish influence in Italy: he initially inherited the duchies of Parma, Piacenza and Tuscany from his mother (1731), and later, when Philip V conquered the Kingdom of Naples and Sicily during the War of Polish Succession (1733-1735), he became the ruler over those territories as Charles VII. In 1729 he married Maria Amalia of Saxony, the daughter of Frederick Augustus II, duke of Saxony and Lithuania, and king of Poland.

An extraordinarily dynamic leader with an enterprising spirit, he fostered the economic, cultural and educational growth of Spain. He granted political power to the bourgeois, supporting their interests through legislative initiatives such as the creation of the Order of Charles III, opening up overseas trade, and abolishing the so-called “vile trades”.

The first issue he had to deal with upon ascending to the throne of the kingdom of Spain was the Seven Years’ War to halt the British expansion in America and, later, he collaborated in the independence of the United States of America. Following the principles of the Enlightenment, Charles III made important reforms, but did not go so far as to alter the basic social, political or economic order. He reformed the army and bolstered the Spanish naval capacity to such a degree that it could be considered as the most powerful naval force of the time, after the British navy.

He died in 1788 and his son, Charles IV, succeeded him on the throne.

BLADE. 90 cm long blade, 3.2 cm wide at the ricasso and 1 cm at the point. Completely forged and tempered by hand in carbon steel by the master . Antiqued finish.

The ricasso is engraved on both sides: on the front it is inscribed with the words “En Toledo”, to indicate that it was made in this city, and bears the master’s touchmark, “AA”. The back side features a very delicate engraving. Below the ricasso, there is a small design on both sides, then the blade is smooth to the point.

CUP. The cup is lavishly engraved and chiselled. The centre of the cup has a coat of arms depicting the head of a soldier and the kingdoms of Castile and Leon.

CROSS GUARD. The ends of the quillons on the cross guard curve in opposite directions. Knuckle guard reaching up to the pommel and two side arms to attach the cup to the cross.

GRIP. The round wood grip is threaded onto the blade tang and wrapped in double wire wrapping, first with braided iron wire and second with braided copper wire. Four ribs have been embedded into the grip and are held by two smooth iron ferrules at either end of the grip.

POMMEL. The solid iron pommel is oval-shaped and chiselled at the middle. It is topped with a ball and threaded onto the blade tang to make the sword stronger and sturdier.