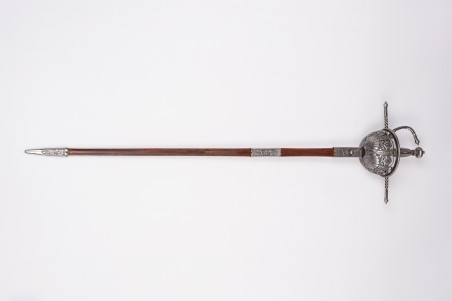 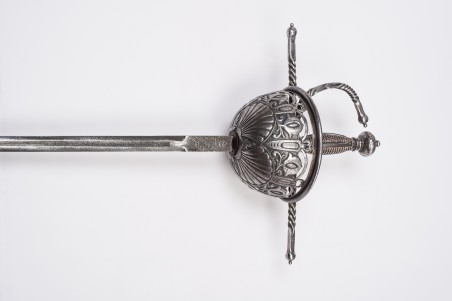 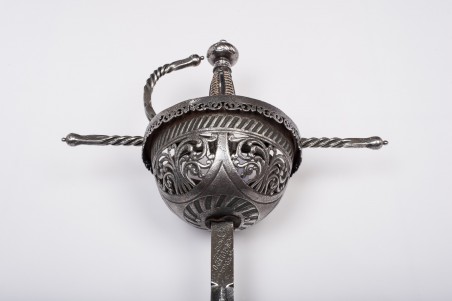 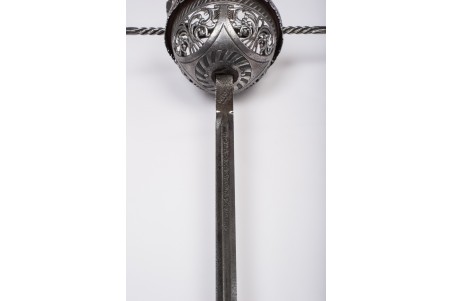 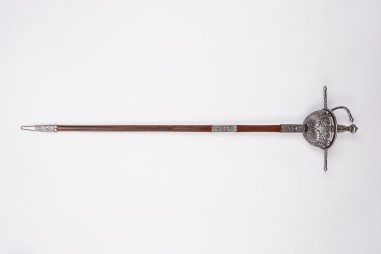 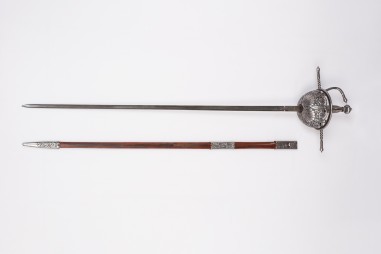 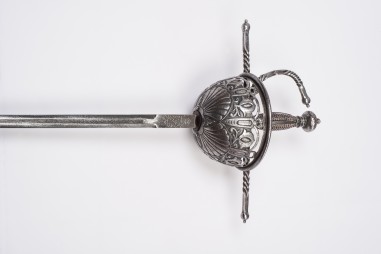 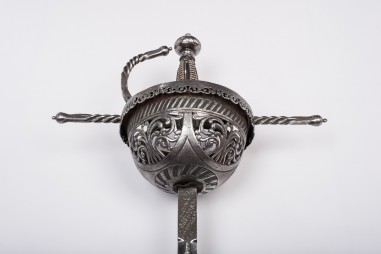 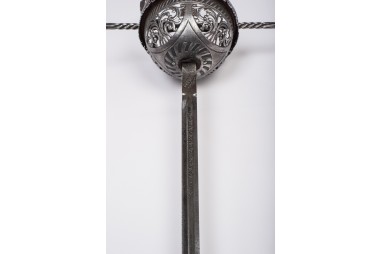 SPANISH DEEP-CUP TIZONA. 17th Century. Handcrafted in carbon steel with an antiqued finish, made by master swordsmith of Toledo, .

The Spanish Tizona, popularly referred to as the cup hilt sword because of the shape of its grip, was widely used throughout the 16th and 17th centuries in Spain, and its reputation quickly spread across Europe.

This weapon was an essential accessory to the most expensive, sumptuous and elegant clothing of the knights of that era. It completely replaced the swords of the plainer, heavier, medieval style.

The rapier could be used for both attacking and as a defensive weapon, and it was wielded by men when they were wearing civilian dress. These swords were restricted to the upper echelons of society, such as the members of the royal family, monarchs and knights of military orders like the Order of Alcantara.

This is a Spanish-style sword with a distinctive cup-shaped guard that could have a range of finishes (fretwork, engraving, chiselling) and a slender blade forged and tempered by hand.

BLADE. 92 cm long blade, 2 cm wide at the ricasso and 0.50 cm at the point. It was forged and tempered by hand in carbon steel by the master . The long and very light-weight blade is engraved on both sides of the ricasso: on the front side it is inscribed with the words “En Toledo” and bears the master’s touchmark, “AA”. Below the ricasso, it has a fuller in the centre featuring finely detailed engraving running to the middle of the blade. After that, the blade has four bevels, two on each side, which extend to the point.

CUP OR CAZOLETA. Large chiselled and fretted cup with round fluting around the cup edge. The upper part of the cup has fretwork and the rest is chiselled. The cup has a very beautiful Renaissance design.

CROSS GUARD. The cross guard is spectacular, with the main quillon twisted into two arms and topped with a ball at either end. In the centre, there is a finely engraved design on both sides. Two semi-circular side arms reach down from the cross to the inner part of the cup, and a knuckle guard - also with a twisted design - reaches the pommel, finished with a ball at the top.

GRIP. The rounded wood grip is threaded onto the blade tang. Like the cross guard and the cup, it is beautifully made, with double twisted wire wrapping, first in iron, and then in iron and copper wires. Four ribs have been embedded into the grip and are held by two smooth iron ferrules at either end of the grip.

POMMEL. The pommel, with its round, flattened, cut shape, is consistent with the general beauty of this sword. It is finished with a ball at the top. The tang is inserted into the pommel, then riveted to give the sword enhanced strength and resilience.