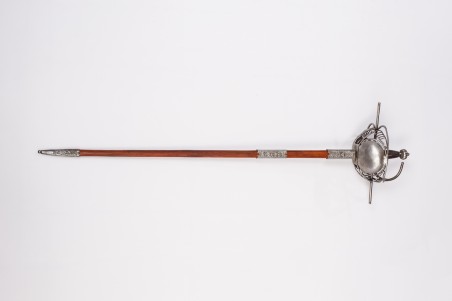 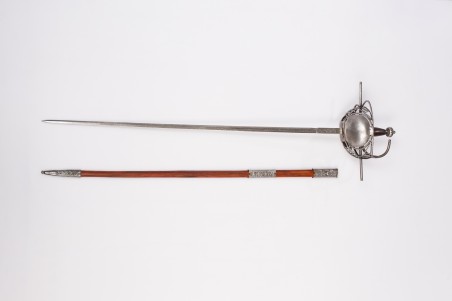 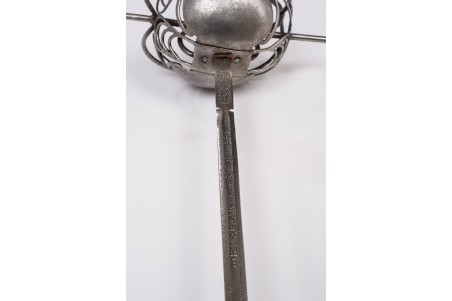 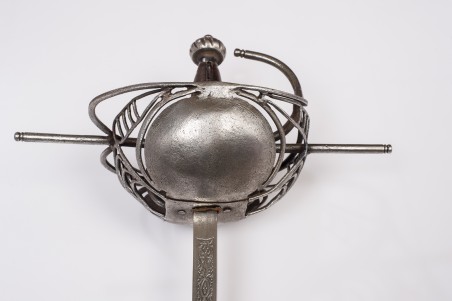 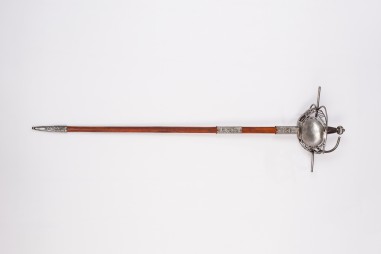 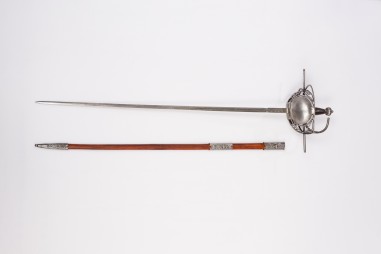 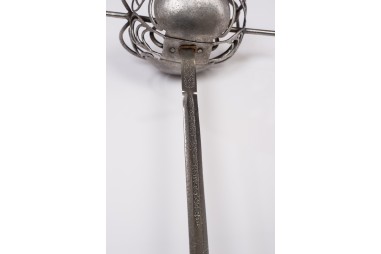 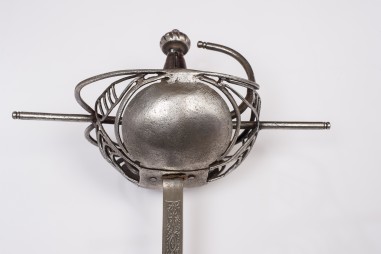 DOUBLE-SHELL PAPPENHEIMER SWORD. 16th-17th Century. Handcrafted in carbon steel with an antiqued finish, made by master swordsmith of Toledo, .

The name Pappenheimer comes from a general in the Thirty Years’ War in Germany. This type of sword, with its combination of looping quillons and shells, became very popular among the soldiers of the Tercios as it was sturdier and lighter weight than the cup hilt sword. Many of these soldiers, both Spaniards and Germans, also fought in the Thirty Years’ War in Germany and therefore large numbers of soldiers began to use this type of sword, which was associated with the name of the Count of Pappenheim. Like all Hapsburg weaponry, it could have been either Spanish or German.

During the Thirty Years’ War, the use of swords featuring hilts that could be said to combine the quillons of swept hilt swords and the shells of Walloon hilt swords became widespread. They later came to be known as “Pappenheimer” swords, in reference to the forces of the imperial cavalry which, in said war, was under the command of the fearless Gottfried Heinrich, Count of Pappenheim, the famous general who died as a result of wounds sustained in the battle of Lützen.

On 16 November 1632, in Lützen, Germany, the Protestant forces of king Gustavus Adolphus of Sweden, taking advantage of the fact that Pappenheim's cavalry troops were marching toward Cologne, attacked Count Wallenstein’s Catholic imperial forces. During this battle, Gustavus Adolphus refused to wear his armour because of the discomfort it gave him, caused by an injury on his shoulder. Claiming that God would be his protection, he led the left flank of his cavalry troops dressed in a velvet coat, and was killed in battle.

Despite this, the Protestants were victorious in the end and the late arrival of the returning German cavalry, under Pappenheim’s command, merely allowed Wallenstein to retreat in good order. Pappenheim also sustained a harquebus bullet wound, but refused to be evacuated while the battle continued. He died shortly afterwards, and is said to have done so with a satisfied smile, knowing that Gustavus Adolphus had met his fate earlier.

BLADE. 90 cm long blade, 1.8 cm wide at the ricasso and 0.5 cm at the point. It is very light-weight, thin, easy to use. Completely forged and tempered by hand in carbon steel by the master . Antiqued finish.

The ricasso is engraved on both sides: on the front it is inscribed with the words “En Toledo”, to indicate that it was made in this city, and bears the master’s touchmark, “AA”. The back side features a very delicate engraving. Below the ricasso, the fuller is engraved on both sides, then the blade is smooth to the point. The blade features four bevels, two on each side, down to the point.

SHELLS OR CUP. “Pappenheimer” swept hilt sword. First half of the 17th century. Iron hilt made up of a 31 cm quillon attached to the knuckle guard. Several side arms, or smaller quillons, branch out from this main quillon and are intertwined at the sides of the cross, leading to two main shells at the front and back of the sword.

GRIP. The wood grip is covered with distressed leather and features four inlaid ribs. Smooth iron ferrules are attached at either end and the entire assembly is threaded on the blade tang to secure the sword.

POMMEL. The round, grooved, solid iron pommel has a ball at the top. It is threaded onto the tang, then riveted to give the sword enhanced strength and sturdiness.