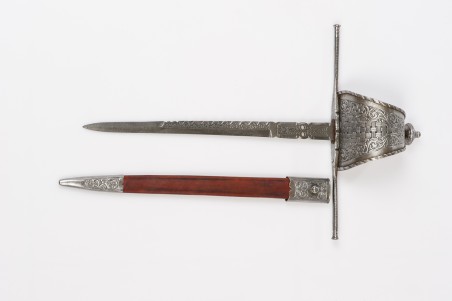 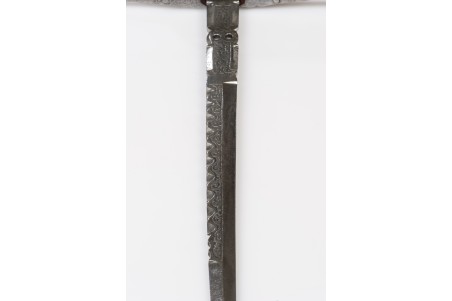 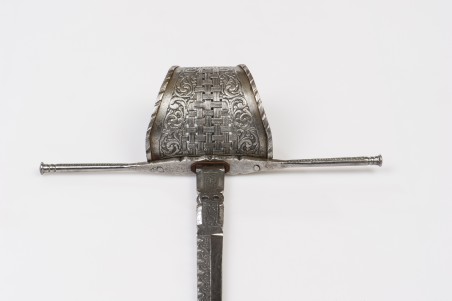 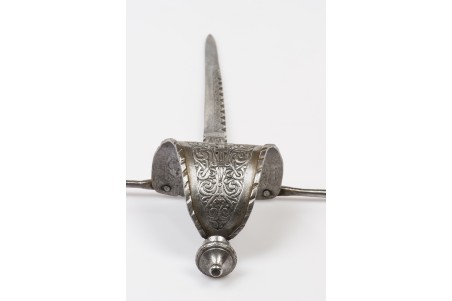 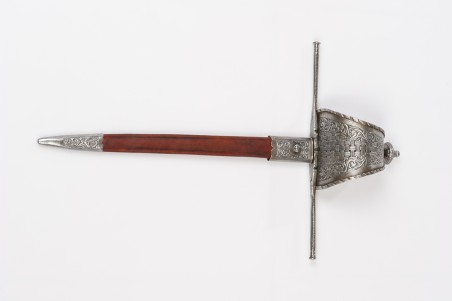 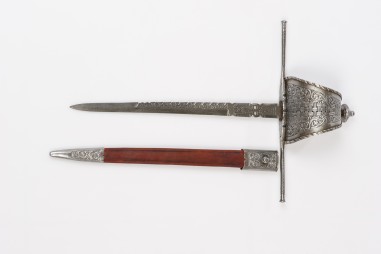 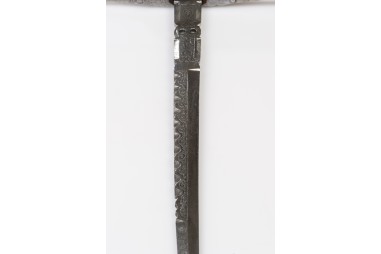 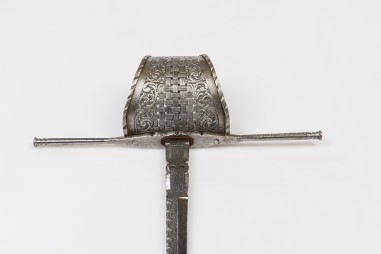 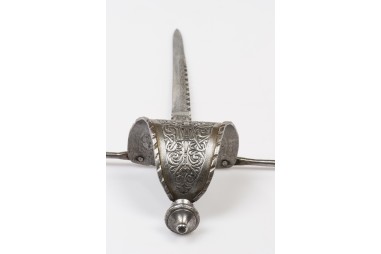 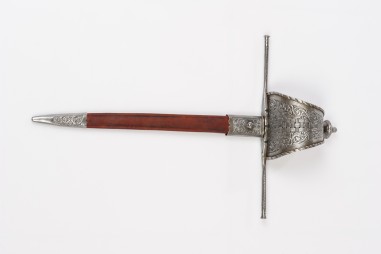 LEFT-HAND DAGGER WITH CHISELLED FLUTING. 16th Century. Handcrafted in carbon steel with an antiqued finish, made by master swordsmith of Toledo, .

The left-hand dagger, or main gauche, arose in the mid-16th century, when two-handed sword fighting, meaning using a sword in combination with a dagger held in the left hand, became popular. It was used to block the enemy’s thrusts and pierce his defence at the first opportunity. The main gauche served to avert the enemy’s sword and for stabbing. This left-hand dagger was crafted by hand in Toledo (Spain), features an engraved steel blade and knuckle guard, and includes a leather scabbard. Length: 53 cm.

The knuckle guards on these daggers were unique, and their hilts were made en suite to match the companion sword. This type of knuckle guard represented an important advance in terms of hand protection given that, up to that time, daggers only featured a cross guard similar to that of their larger companions for blocking the enemy’s thrusts and for preventing the wielder’s hand from slipping toward the blade when thrusting. This is another left-hand dagger made in Toledo (Spain) with a smooth stainless-steel blade, and including a leather scabbard.

These scabbards were made of leather and fitted with metal lockets and chapes. They were often tied to the wielder’s back, open to the left side so that the dagger could be unsheathed with the left hand, or positioned almost horizontally on the person’s right side for the same purpose. The scabbard details were in line with the weapon category.

BLADE. 38 cm long blade, 2.5 cm at the ricasso and 1 cm at the point. Completely forged and tempered by hand in carbon steel by the master . Antiqued finish.

The ricasso is engraved on both sides, and on the back side it is inscribed with the words “En Toledo”, to indicate that the dagger was made in this city. Next to the inscription, the master’s touchmark, “AA”, appears with a beautiful engraving at the top. After the ricasso, the blade has undulations on the right-hand side and engravings on both sides, reaching up to the foible, where the blade has two bevels on each side. It is said that these undulations in the blade were soaked in poison to quicken the adversary’s death. For this reason, they were known as “Daggers of Mercy”.

GRIP. The grip is made of wood wrapped in copper wire with four inlaid ribs and finished with two chiselled ferrules at the ends. It is threaded on the blade tang.