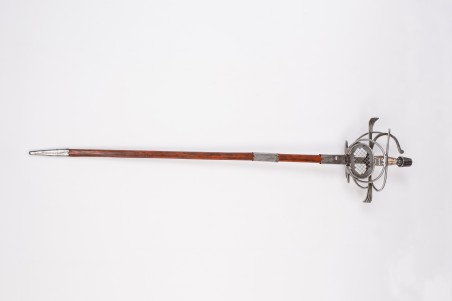 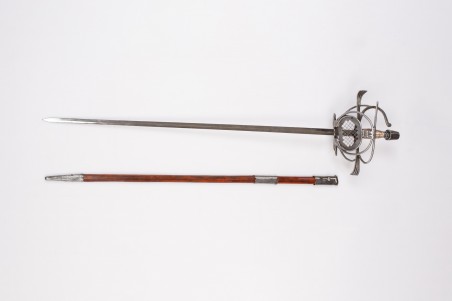 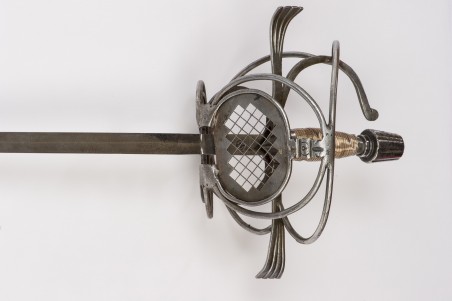 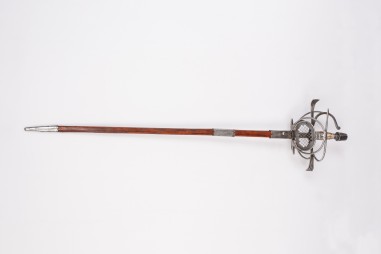 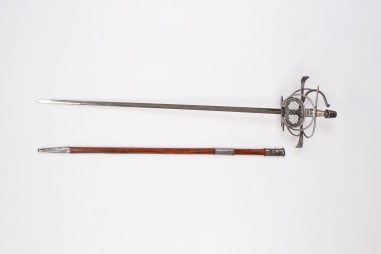 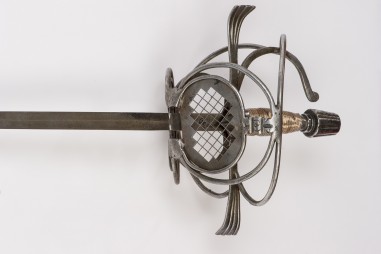 PAPPENHEIMER RAPIER SWORD. 16th Century. Handcrafted in carbon steel with an antiqued finish, made by master swordsmith of Toledo, .

The Pappenheimer sword, as this type of rapier sword is called, was popularised by the Count of Pappenheim, who fought in several battles of the Thirty Years’ War. One of the most famous battles in this war was the Battle of White Mountain, in which he played a key role in the victory of the Catholic armies.

Its handsome appearance made it the sword of choice for civilian nobility, but it never became fully accepted by the military, except as a dress sword. However, the hand protection afforded by this new sword was obviously quite useful in battle. It was wielded by numerous fighters in the Thirty Years’ War. The Pappenheimer rapier sword was chosen by many because it was light-weight, flexible, capable of cutting and thrusting, but not terribly heavy.

BLADE. 93 cm long blade, 2 cm wide at the ricasso and 1 cm at the point. It was forged and tempered by hand in carbon steel by the master . Very light-weight, thin, easy to use blade.

The master’s touchmark, “AA”, appears on the front side of the ricasso. Below the ricasso, the blade is divided into four bevels, two on each side. Forged and tempered by hand in carbon steel.

SHELLS AND CROSS GUARD. The hilt features two iron plates with fretwork to make them lighter than typical shell hilt swords while offering more protection than swept hilt rapiers. The cross guard has a 26 cm long quillon with flared, grooved, tips. Knuckle guard reaching up to the pommel. Two circular side arms attach the cross to the fretted plates. Two branches run from the knuckle guard to the opposite end of the cross.

GRIP. Oval wood grip with simple iron wire wrapping and another double copper wire. It has deep notches and is threaded on the blade tang. The grip also has two smooth iron ferrules at the ends.

POMMEL. Cone-shaped solid iron pommel with eight grooves and a ball on top. It is threaded onto the blade tang to give the sword enhanced strength and resilience.

SCABBARD. Brown leather scabbard made by hand especially for this sword. It contains three iron pieces: at the top is a smooth “brocal”, or locket, with a round button to attach the scabbard to a belt. There is one smooth “cantonera” fitting in the upper third of the scabbard, and it is finished with an iron “batiente”, or chape, to cover the point.