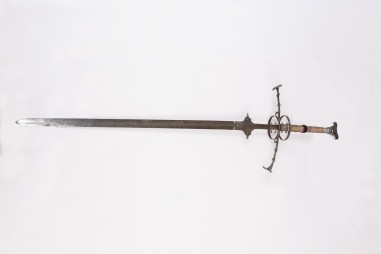 TWO-HANDED GREAT SWORD, OR MANDOBLE. 15th Century. Handcrafted in carbon steel with an antiqued finish, made by master swordsmith of Toledo, .

The mandoble, or great sword, is an amlargeuous term used to describe a large-sized, heavy sword that must be wielded with both hands to gain speed. It was popular in the 15th and 16th centuries, used by foot soldiers and designed to effectively attack plate armour and coats of mail, often causing serious injuries or bleeding without actually piercing the armour. However, its main goal was to break the ranks of armoured pikemen to enable further attack, such as a cavalry charge.

The grip of a great sword occupied about one fifth or one quarter of the total weapon length, it was equipped with long cross guards, and usually finished with a pommel so that the left wrist could rotate above it, allowing the wielder to deliver quick blows or thrusts from a considerable distance. These swords could also be held with one hand on the grip and the other on the forte, which was not sharp, thus enabling them to be accurately used at short distances. To facilitate this potential use, or to minimise its hazards, they were also often equipped with spikes just above the blade, as a kind of pseudo-guard to make gripping easier, stop the hand from slipping toward the blade, and to prevent the enemy’s sword from sliding along the blade edge to injure the user’s hand.

The late medieval origins of this sword can be traced back to the primitive Nordic Seax, which gradually evolved in shape and size until the present version was reached. Initially, large-sized swords were produced without any kind of decoration or hilt; the aim was to provide the structure with an appropriate mass and sturdiness. The use of these weapons became very popular among Germanic and Swiss tribes and those of the Scandinavian regions.

BLADE. 115 cm long blade, 2.3 cm at the ricasso, 4 cm wide blade, and 1.8 cm at the point. 13 cm below the ricasso, the blade widens into a star shape with a width of 11 cm. From there, it tapers to 4 cm to the point of the blade. It was forged and tempered by hand in carbon steel by the master . Very light-weight, thin, easy to use blade.

CROSS GUARD. The cross guard is 36 cm long. The cross is highly elaborate, covered with a series of patterns and finished with folded leaves at both ends. Two circles stem from the centre of the cross: one toward the front and one toward the back. These two rings have diverse patterns around the circumference, and a double iron fleur de lis can be seen at the centre of each one, joined by a rectangle in the middle.

GRIP. The grip is 29 cm long. It is made of wood and divided into two parts, wrapped in different types of twisted steel and copper wires. It has a thick braided iron ring around the top and is threaded onto the blade tang.

POMMEL. The pommel is irregularly shaped, reminiscent of a blacksmith's anvil. It is made of solid iron, with a fretted circle in the centre.

This piece comes with a certificate of authenticity, guaranteeing that it was made by hand and is signed by the master swordsmith, . It is considered a unique work of art, as no two swords are exactly alike.